This is Scientific American's 60-second Science. I'm Jason Goldman.
Deep beneath the frozen surface of the Arctic swims a sea unicorn. In reality, it's a whale with a spiral tusk sprouting from its head—the narwhal. Biologists have long debated the purpose of male narwhals' tusks. The tusk, like those of elephants, are actually elongated teeth. And since narwhals are usually below the sea ice, it's tough to see how they use their tusk.
"It turns out we don't know pretty much anything about them, because they're impossible to study in the wild."
Arizona State University evolutionary biology graduate student Zackary Graham. He wondered if the males' tusks were a sign of status as a potential reproductive partner. Comparing tusk size to the whales' overall body size could provide evidence.
"One of the main trends that has been documented in over 100 different animals of one hundred different traits is disproportionate growth. We call that hyperallometry. All that means is that the sexual trait is growing disproportionately, co﻿﻿﻿mpared to the rest of the body. So it's not like the biggest narwhal is just a scaled up version of a baby narwhal. What we see is that the tusk is disproportionately long. And then we also see that there is intensive variation."
So Graham and his team turned to measurements collected from 250 adult males over 35 years.
"The majority of them are from the Inuit hunt. So the Inuit have been killing narwhals for thousands and thousands of years. And any time they do that, the Greenland Institute of Natural Resources asks them to collect a bunch of data." 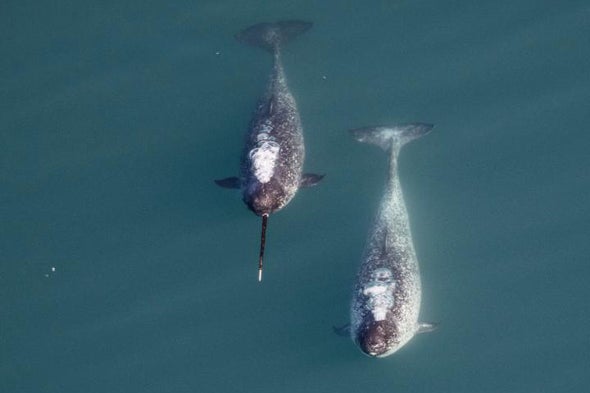 Turns out the length of the tusks can vary widely even for males the same size, ranging from a foot and a half to more than eight feet. The finding is in the journal Biology Letters.
The top tusks thus appear to be like a billboard that shouts, "Look at me. I'm the biggest." After all, only the strongest, best fed individuals can afford to produce such an ostentatious ornament. Of course, tusks can do more than just say, "Hey, how you doin'?"
"But the fact that these narwhals always have these scars on them makes us think that it's likely a communication structure that also functions as a weapon."
For Graham, there's also a larger issue: some evolutionary biologists have recently proposed a hypothesis that groups of animals with elaborate sexual signals are more likely to speciate and diversify than those without.
"We know the world is changing around us more than ever, so understanding how and why species are going to be able to adapt and deal with this is key if we are to protect and manage the species we have on earth today."
Thanks for listening for Scientific American's 60-second Science. I'm Jason Goldman.